He Said What? UFC Fight Night 26: 'Shogun vs Sonnen' edition 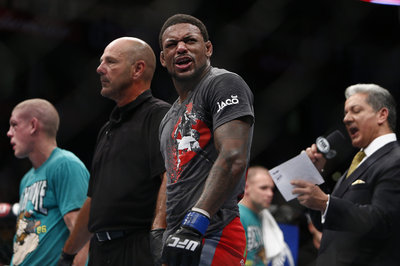 UFC Fight Night 26: "Shogun vs. Sonnen", which took place at TD Bank Garden in Boston, Mass., is officially in the books after an entertaining Saturday evening (Aug. 17, 2013) of mixed martial arts (MMA) action.

Both the FOX Sports 1 main card and the "Prelims" delivered, as the stacked line up on paper was as good as it was destined to be in reality. The enigmatic Chael Sonnen scored a first-round submission victory over former UFC Light Heavyweight champion Mauricio Rua in the main event and did not waste anytime in calling out Wanderlei Silva in his post-fight interview ... one of the best in UFC history.

Alistair Overeem looked like he was about to finish Travis Browne after mauling him with body shots and power punches, but "Hapa" showed tremendous heart as he bounced back to knockout "Demolition Man" in devastating fashion with a frontkick to the face.

Urijah Faber looked like his usual self against Yuri Alcantara, but he had a tougher fight than most anticipated. Faber found himself in a few submission scares as Alcantara used his power early on in the fight, but Faber capitalized on his speed and eventually smothered Alcantara on the ground, earning his third victory in a row.

Joe Lauzon's homecoming was not exactly how he planned it, as underdog Michael Johnson came into Boston and beat up "J-Lau" for the course of three rounds, almost finishing him on numerous occasions. Johnson's hand was raised on enemy territory and although not many people gave him a chance, he excelled in what was the greatest performance of his UFC career thus far.

Before all the action unfolded inside the Octagon, there were press conferences and promotional appearances to generate awareness for -- and interest in -- the second trip back to Boston for Ultimate Fighting Championship (UFC). Fighters said this and that, answering questions galore when all they really wanted to do is be left alone and not be bothered.

MMAMania.com does a pretty good job of passing along all the noteworthy pre- and post-fight comments for each event. But, as we've done before, let us take a look at the words that left the fighters' mouths before they stepped into the cage on Saturday night.

"The only thing that bothers me is when he talks about my country and my friend, Wanderlei. But I don't try to get too much involved with that. I try to keep my focus on my training, so I can make sure I'll be 100 percent ready for the fight."

--That was Mauricio "Shogun" Rua at the pre-fight press conference, where he was asked about his brash opponent's words toward his country of Brazil and his former training partner, "The Axe Murderer" Wanderlei Silva. No matter how focused "Shogun" was on Saturday night, he was no match for Sonnen. Although the West Linn, Ore., native was easy on Brazil this time, he ironically called out Wanderlei Silva in front of the masses that were watching the broadcast on FOX Sports 1. If "Shogun" did not appreciate the harsh words for his countryman before the fight, it made his loss that more sour after the fact.

"I'm 36 years old now, I'm very fortunate to still be competing at a high level. In the practice room, I'm pushing it just as hard as I always have and I haven't reached my goals yet. I've got a lot of goals in this sport and one of the things that I really admire in athletes is longevity -- someone that can extend their career. I've got my eyes straight down; I'm not looking ahead. One day at a time, one workout at a time, one fight at a time. I can assure you I'm not slowing down."

-- A modest version of Chael Sonnen was alive and well at the pre-fight press conference and although he clearly was looking past Rua, Sonnen mapped out his current status and his near future in the sport. Luckily for him, he proved his worth and his words are more meaningful the morning after; Sonnen is that much closer to his goals with a win over Rua. Speaking about longevity, he proved to the world that he could still hack it as he becomes older and dare we say it, wiser.

"When you lose, it's like a slap in the face. I really feel ready, I'm motivated and I'm happy to be here fighting again in the UFC. I feel positive, optimistic -- I trained my butt off last couple of months...I always approach all my fights with a 100% have to win, so that in sense there's not anything different. But you have to win them all."

-- Alistair Overeem was confident but fairly humble and optimistic, knowing he had to beat Travis Browne at UFC Fight Night 26. Overeem looked good in the opening minutes but unfortunately, the former Golden Glory standout was knocked out by a resurging Travis Brown in the fight that now leaves his UFC career in the balance. He's 1-2 in the promotion and has lost his last two bouts via knockout. The future does not look good for Overeem and his confidence -- above all -- takes a massive step back.

"I look forward to being challenged physically. He's probably the biggest guy in the weight class ... he's got power in his hands and he's a good submission guy. As far as what he brings to the table, he's just dangerous. I would like to have some big fights in the future -- I'm going to talk to Dana and Lorenzo after this and see if we could setup some superfights -- maybe even go up to 145 pounds. I feel like I need to be in some fights that really matter. These title shots are not going to stop. (Team Alpha Male) will be getting title shots for the next 15 years if everything goes the way I want it to."

--That was Urijah Faber during his pre-fight open workout media scrum -- as well as an interview with Bleacher Report -- where he credited Alcantara for his skills but also looked past his opponent as he started to talk about his plans after the fight. Luckily for Faber, his skillset in the Octagon is as good as any bantamweight on the planet and having brought home this victory, a potential superfight or even another title shot is in his reach. He credits his training camp to be at the forefront of the sport with constant title shots coming their way.

"Second thoughts? Absolutely not. My first thought was I'm excited to get this fight. I've wanted to fight Joe or a long time and getting this in his backyard is great for me. Were' definitely going out there and put on a fight. No pressures on me, he's expected to come here and run right through me but it's going to be a little bit different on Saturday night. This is a huge fight for me -- it's all or nothing."

-- Michael Johnson knew what he had to do and his words couldn't have been more right. The pressure may have gotten to his opponent, Joe Lauzon, as Johnson clearly did not feel any while he delivered the best performance we've seen from him in the Octagon. Although his opponent didn't put on much of a fight, Johnson went out there and took it to "J-Lau" for three rounds, earning a huge upset when the odds were stacked against him.

Email ThisBlogThis!Share to TwitterShare to FacebookShare to Pinterest
Labels: 'Shogun, 26:, edition, Fight, He, Night, Said, Sonnen', UFC, vs, What?